Why do wine bottles come in different shapes?

You can recognise wines, or wine types, by the shape of the bottles they come in. For example, the Portuguese Mateus Rosé bottle was made of green glass and had a squat rounded base. In the 1970s and 80s it was immediately discernible from its elongated competitors. In the past, Italian Chianti also had a distinctive bottle and sat in a raffia basket. Many Chianti drinkers used the bottles and baskets as candle holders and lamps. The packaging of these two wines made them immediately appealing and different. Today there are many different types of wine bottle, but there are three main ones — the Bordeaux, Burgundy and Alsace/Mosel bottle.

The Bordeaux bottle has larger ‘shoulders’ than the Burgundy one. It was created after the Burgundy bottle. Burgundy and Bordeaux winemakers were, and are, rivals, so their bottles had to be different as a matter of prestige. The Bordeaux bottle housed Cabernet Sauvignon and Merlot and it quickly spread around the world, along with these grape varieties. Some people believe that the ‘shoulders’ were designed to trap the sediment present in aged Bordeaux as the wine was being decanted into another vessel. However, no one knows for certain that this is the reason for the shape.

The Burgundy bottle curves gently from the neck. This type of bottle came into being in the 19th century. It’s generally believed that this bottle has its shape because it’s easy for glassblowers to make. Burgundy producers used it for red and white wines made from Chardonnay and Pinot Noir grapes, so it housed both red and white burgundies. As these grape varieties travelled around the wine-producing world, so did the bottles. In the past, a white wine in a Burgundy bottle indicated that it had encountered oak in its production, pre-bottled phase. However, this is no longer, necessarily, the case.

The Alsace/ Mosel bottle was designed for Riesling, dry and sweet, although now it also houses, Gewürztraminer, which is an aromatic, off-dry white wine from Alsace tasting of lychees. This bottle is thinner and sleeker than Burgundy and Bordeaux bottles and the way it was transported could account for its design. Traditionally, in the 19th century, Bordeaux and Burgundy bottles were shipped to Britain across the English Channel, so the bottles needed to be sturdy so as to minimise breakages on stormy Channel crossings. The Alsace/Mosel bottle, however, didn’t typically have to go on such rough voyages, so it could be more delicate. It was generally transported down the Rhine. The bottles were sleek because the hulls of river boats could accommodate more of them than it could the fatter bottles favoured by the Burgundy and Bordeaux producers.

All three types of bottles can be stored on their sides, in racks. This means that the wine comes into contact with the cork which provides an ideal oxygen-free seal. This protects the wine from oxidisation.

New bottles are being produced all the time; for example, in California, vintners are putting their wines in traditional “Cortas”, which are short, fat bottles similar to more ancient handblown glass containers. No doubt there will be other innovations in wine bottle shapes and sizes in the future. At Garçon Wines we have commercialised a Bordeaux shape, with a Burgundy type bottle currently in development. 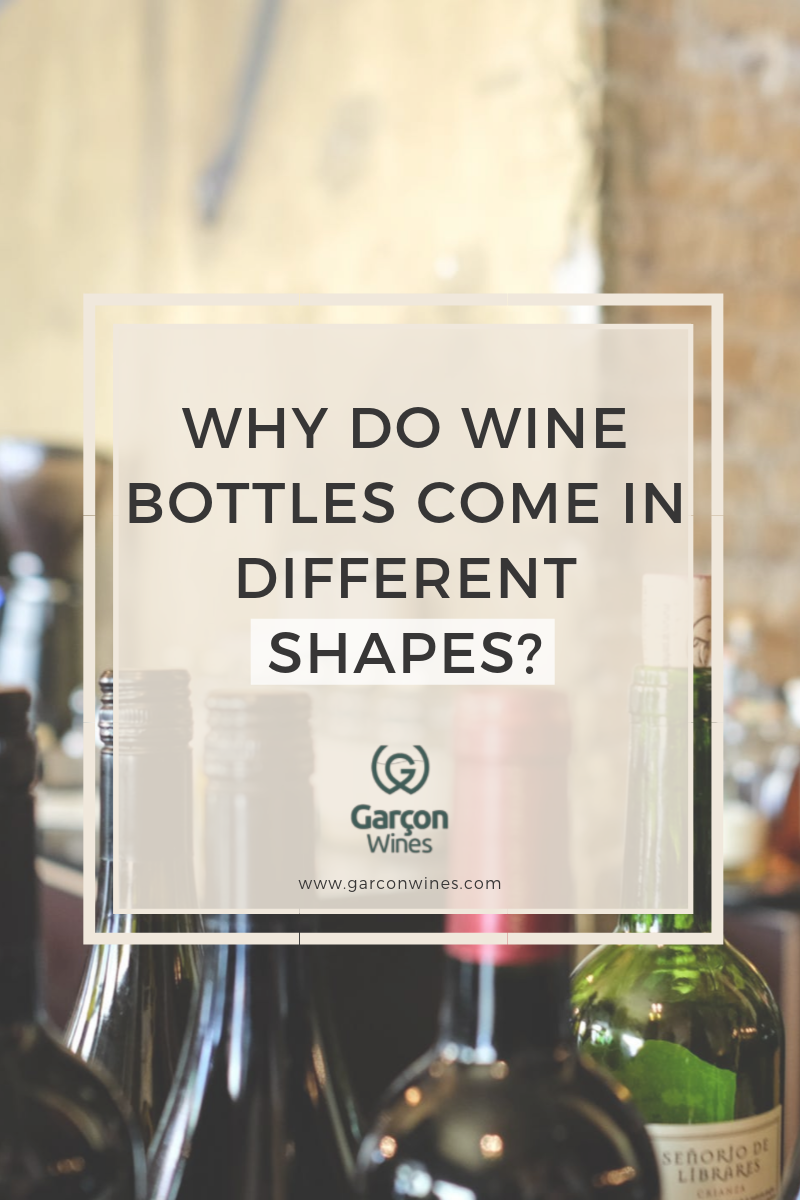