A History of Wine Bottles

A history of wine containers from 6000 BC to the present

It has been thought that the world’s first winery might have been in ancient Armenia. The winery dates back to 4100 BC, and earthenware, a basin that could have been a wine press, as well as grape seeds and dozens of dried vines were also found at the site. These were large earthenware containers used for storing wine which were covered with beeswax. More recently in 2017, earlier signs of wine were discovered; pottery fragments which contained residual wine compounds were discovered in two Neolithic villages, Gadachrili Gora and Shulveris Gora, in modern-day Georgia. These pottery fragments are believed to be 8,000 years old, with the oldest jar dating from around 5,980 BC. Wherever wine production truly originated, it's clear that humans have been drinking wine for millennia. Over the years, the wine containers have changed, as have methods of wine making production and transport.

A thousand years later, in 3100 BC, the Egyptians were making a drink from red grapes, although it is not thought that this was wine. When the Phoenicians came into contact with the Egyptians, they must have sampled this drink that was used in religious ceremonies. It was the Phoenicians who were responsible for introducing wine to the peoples of the ancient world. They transported and stored wine in ceramic vessels, or amphorae. The ancient Greeks and Romans also used these pots to store olive oil, as well as wine. They were lined with beeswax and were reasonably easy to transport and carry. Then the Romans started to use dolia, large wine containers which they cemented to ships’ floors to keep the wine steady and safe on long voyages to far-flung outposts of their empire. The Romans knew that other civilisations, in earlier times, used palm-wood barrels to transport wine, but chose to use their traditional dolia or amphorae.

The advent of wooden barrels

When the Romans encountered the Gauls in modern-day France, they found that they transported beer in wooden barrels and realised their potential. Amphorae were replaced as the wine vessels of choice. The wood for barrels was from oak or pine, and by the 3rd century AD, barrels were the containers used by the Roman army and most merchants. Oak soon became the most used wood for barrels, because there was an abundance of it in Europe. Another reason for preferring oak barrels was that the tight-grained wood meant that the barrels were watertight. Of course, barrels are still used for storing and transporting wine today.

Glass bottles began to be used in the 17th century, although they were different shapes to the wine bottles of today. They were squat, with large bases and short necks. By the 1820s wine bottles resembled the traditional ones we use today. These bottles needed stoppers, and cork was found to be ideal for the purpose, although it does allow a small amount of oxygen into the bottle.

Wine bottles made entirely from recycled PET plastic made their debut in the 21st century, and clearly, they have advantages over glass bottles. To begin with they’re lighter to carry than glass ones, they're made of pre-existing material and they can be recycled after use. The flat wine bottles that we at Garçon Wines have made can be posted safely through your letterbox. There are likely to be more innovations in the manufacture of PET wine bottles and we’ll keep you posted! 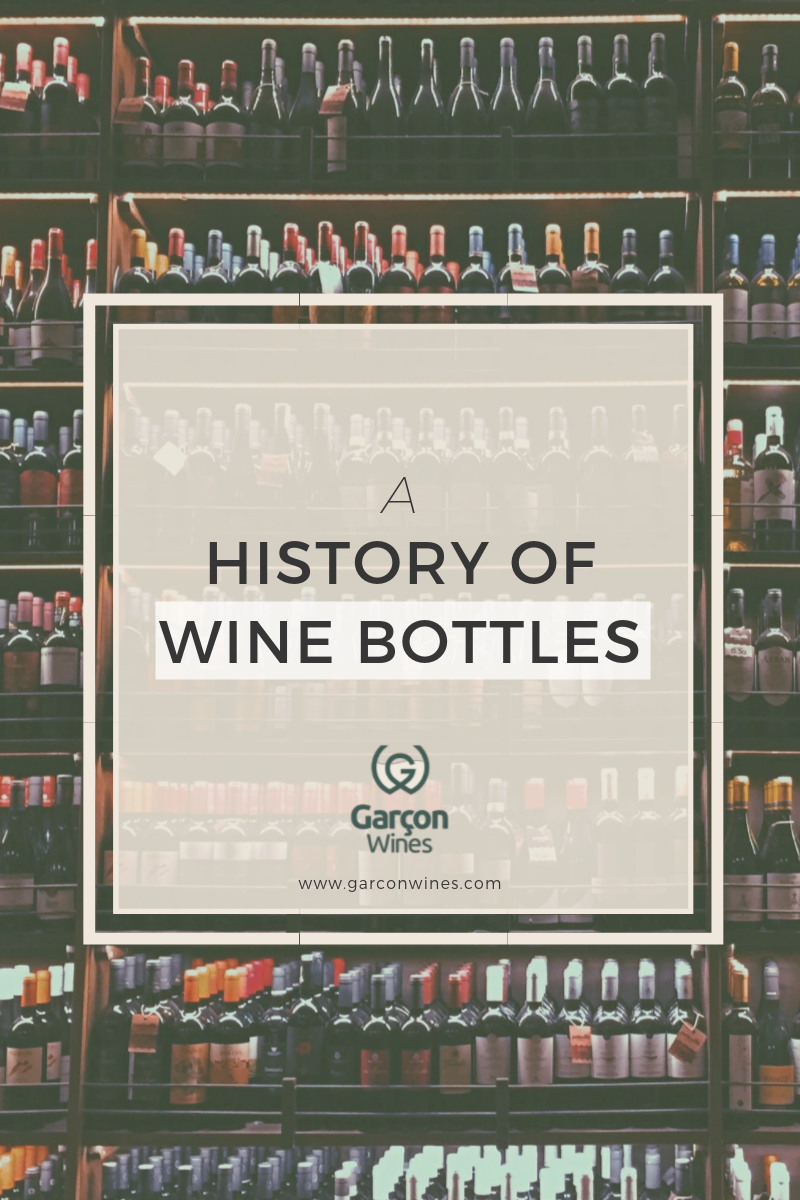